Last night’s dinner was fun. We’ve planned this months ago and even if not everyone was able to come, it still wasn’t a drag. We had steak (they did, I had baby back ribs, which I was prepared for because my last meal before that was at 9 am), different pasta dishes, oysters and pannacottas. It was wonderful for me because some people in my circle vowed to never get along anymore but they still manage to be together in night-outs like this, which works well for their common friends.

All of us have other errands after dinner so we went ahead at 8:30. I trooped to Fully Booked and went home at 9:45 armed with loads of books. I am too weak especially during this time of the year. Ugh, year-end bonus, you screwed me again.

To get to Rockwell, by the way, Dennis was kind enough to give us a ride to Paseo. Despite the terrible traffic, we had a great time because Dennis was his usual whack job self. For example, I told them I was wondering what Lins was, having seen it everywhere but have no idea what product it actually is. I said it could be a brand of soy sauce. As you can see, its tagline says, “Bestfriend ni Nanay”. What could that be? 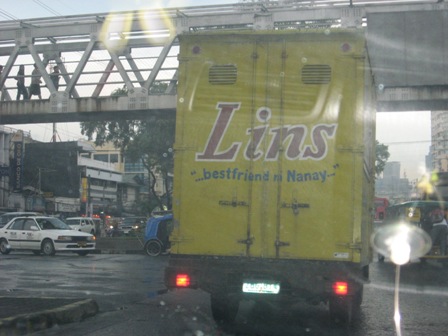 We all laughed until he countered, “Why? Mothers have needs!”

I swear, it was funny when you’re in the car with us.

I carry my camera more often these days but I couldn’t take pictures as much as I wanted to. I guess it gets pretty tiring as you age. You just want to take the ones you think you’d like to remember. So as it happens, other people try to do it for you.

But sometimes, practice is important. Erwin needs more of it. He always does this when he comes over and sees my camera on the table. So that’s supposedly him, a little part me tinkering his iPod, and his desire to show how messy my table is.

The writers’ strike is becoming sadder by the day. I wonder how many more episodes Desperate Housewives has to air before it stops temporarily. I hope the 7th episode is already done – that’s the one with Sarah Paulson playing Lynette’s sister Lucy.

My download of the 6th episode of Desperate is about done and I can say that I am really liking Katherine Mayfair more. I just hope her arc will not disappoint. Now that the new neighbors seem to know something about her secret in Chicago, I hope it unravels soon. One more thing, the actor playing Lee, who some said is a jerk but to me he’s not – particularly when he snaps at Susan, interestingly played a chef in two shows that I’ve seen him on. He was Monica’s sous-chef on the 8th season of Friends (Chef: I work for Monica, I’m a sous-chef. Sous is French for under. Phoebe: I sous-stand.) and a killer chef on CSI, where he fed a date, someone he sought to have revenge on, a live squid on a stick (whatever it’s called), a cuisine so exquisite and delicate you have to wrap the squid on the stick very carefully so it will slide down your throat smoothly, otherwise the tentacles may grasp your throat and well, choke you to death. I just thought it’s cool to know.

I wish the coming days would have less complications. Either that or I would be motivated to always take the safe route because it is simpler that way.