Two more in my pile!

Less than 12 hours after my book update, guess what I did before coming home today? I bought 2 more books.  It’s the fault of National Bookstore; it was on my way! 🙂

What prompted me to buy was the copy of The Girl with the Dragon Tattoo, the first book in the talked-about trilogy of Stieg Larsson.  I saw it two years ago in Powerbooks and I read about three chapters of it but I decided not to buy it yet*; when it finally got the reading community curious and interested, I found local bookshops always out of stock.  But yay, today, it was right there in the bestsellers nook of NBS Robinsons Manila! And 20% off the cover price!

I want to read this before the buzz on its upcoming Hollywood adaptation grows louder.  So far, Daniel Craig has been cast as journalist Mikael Blomkvist.  Other stars are beginning to be in talks with the film’s creators but the biggest anticipation would be who will play Lisbeth Salander.  Some fans are building a strong case for Ellen Page, probably brought by all the Inception fascination.  I cannot give my own two-cents’ because I haven’t even read about Lisbeth thoroughly*.  Anyway, I’m definitely going to read this one in 2010. 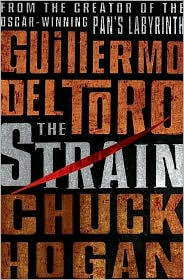 I also decided to buy The Strain by Guillermo del Toro and Chuck Hogan (also 20% off the cover price).  It’s also the first book in a trilogy.  I trust that it will not be your run-of-the-mill terror novel (del Toro created the amazing Pan’s Labyrinth after all) but I’m not holding my breath, too (because it has “vampiric” elements!).  It was released barely two months ago that’s why I’m happy to get it this early here and in paperback, no less.  I hope I won’t wait as long for the second and third installments which are due for release in October 2010 and early 2011 respectively.

I have both books in my Manila International Book Fair (MIBF) list but there’s no difference if I buy them earlier.  See, if I aim to buy books that are available anyway in current Powerbooks and NBS price-cut sales, why not buy them now?  It’s one of the things I want to change this year.  I noticed that most books I bought in previous MIBFs were from big bookstore chains.  Well, this year, I will not go to them.  I will scour the exquisite book booths, the local publishers, even those whose specialty is textbooks.  I also intend to gather all Spanish modules that I can. I also plan to collect free bookmarks.  My penchant for bookmarks deserves an entire blog entry of its own!

I know I already asked it below but again, tell me, what books did you buy recently?

*I used to frequent Powerbooks Live! and read books without buying them.  How do you think I finished Paulo Coelho’s The Witch of Portobello and Audrey Niffenegger’s Three Incestuous Sisters??? 🙂 Too bad the branch did away with The Java Man. It was a perfect excuse to get books from shelves and read until it’s night-time. 😉