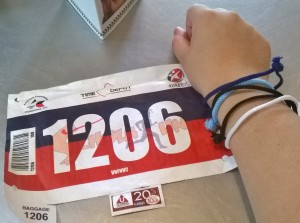 My race bib and bracelet markers. I made it, teehee.

I ran 10K again earlier today. My last 10k was two years ago when my former boss requested us to join him for his farewell run in Manila. This time I, along with some people in the office, ran in support of ScholaRun, an American Chamber of Commerce charity event. I initially thought it was a mistake registering for 10k seeing that I haven’t trained in a very long time. Up until the gun start, I told myself if I finish the 1st loop and feel that I can’t do another loop, I’m going to stop. But hey, I didn’t. I’m limping a bit now and have to take the stairs one step at a time but overall, I’m feeling okay.

One of the things why I gave up on fun runs/races is having to wake up so early. I picked up R at 4:30 am and I was still really sleepy. But nothing could wake me up faster than realizing I left my phone at the cab! Good thing the light turned red after we were dropped off so I managed to get it back. Whew. So yeah, that was around 4:50 am, and it woke me up for real.

Like all my runs, the first five minutes, despite the warm up, were still the waking-up-my-limbs phase. I was happy when I was still running when I passed the 1st kilometer mark. That’s a first for me, sustaining it like that. Looks promising, Judie, I said to myself. 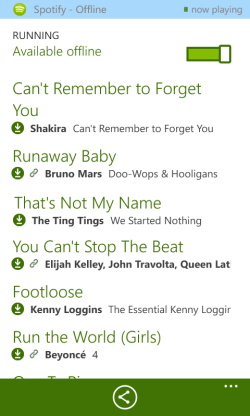 I made in haste a playlist to keep me moving. Judge away but those songs are legit choices. I set it on shuffle and should last me 50 minutes before it repeats. When I passed the first station handing out bracelet markers, The Ting Tings were happily singing in my ear.

A little past the Home Depot area, or around the 2k block, I felt like walking. But then Beyonce started blaring and when she sings to you, “We run this motha (yeah)…we run this motha…!” you have TO RUN. So I did.

A combination of long run, semi-long walk brought me back to 34th Street which was almost near the Start line. Oooo, I was almost done with 5k. It was a no-brainer after that, Imma go for another loop!

When I crossed the 6th kilometer mark I started questioning my choice. Hahaha! By this time, it’s so hot already. So I alternated walking at shaded areas and running when the sun’s directly hitting my face and arms. I guess it worked plus when Kenny Loggins enthusiastically sings Footloose, you have to look and act alive.

My beat-perfect song has always been Runaway Baby by Bruno Mars (try it, you’ll get moving with each beat), so on the 7th kilometer near Burgos Circle, I was keen on just walking when it played. I really mumbled, “Come on now!” because I knew I had to run to it. I did, albeit slowly.

I wasn’t really “I’m dying” tired but I was walking more than running so I felt happy when I saw this: 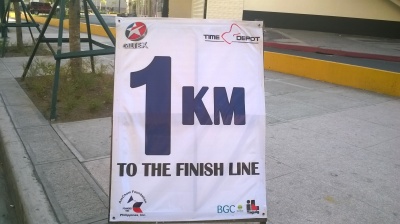 Almost there! Eight minutes later, as the cast of Hairspray led by Motormouth Maybelle was singing in my ear, I crossed the finish line. I also heard my office friends cheering and shouting my name (I was the last in our group who finished, hehe). Yay! Made it and it took me an hour and 28 minutes — which is, if I may brag, 20 minutes early than my previous PRs! Sweeeeet. 🙂

Lootbag, photo ops, and mingling after, I treated myself to this: 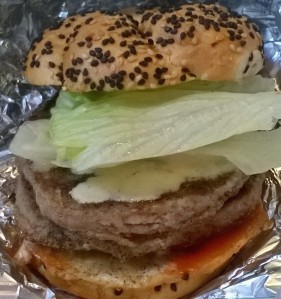 It’s a really good way to start my Sunday.

I am not going back to joining runs, that I’m sure. I just did this one because it’s for charity and my office is somehow supporting it. However, I’m sure I’m going to keep training and running on my own. I trained for this only a week in advance, and I liked the feeling. There’s something about sweating that makes me feel good. I think it’s the afterglow that I like. Hmm. 🙂

Anyway, I enjoyed my run today.