This is neither a romance nor an original story.

Despite saying I will stay away from dating apps and dating sites (“with finality”, ugh), I revived some accounts and met men thru there – the most interesting of which was the biggest meltdown of 2018, but that’s not what this story is about.

A year ago, I thought that in order to move on from someone, it could help meeting other men so I did a swiping spree. This guy and I, we matched because I had not changed my location from my island vacation and he set it on the same island because he’d be assigned there in a few months. It’s an easy one to ignore if you’re into someone in the same location. We kept talking because it turned out we needed a person patient enough to listen to our attempts justifying what we feel.

Not to say we didn’t try seeing if we will click in a romantic sense; we did try but I guess we both reeked of, “I am not over someone” even when we’re in opposite sides of the world.

The most regular conversation I have now is from someone who just had his ❤️ broken. The advice I give him is the one I keep telling myself. We agreed that what we have isn’t gonna work out THAT way. We’re just two stupid people still hung up on those who will never choose us. https://t.co/0nrgVXdNtk

On my end, he was a welcome respite because God knows I have exhausted my bestfriends’ patience. He somehow understood me in the aspect of holding on despite not fully getting the one you want, even just a sliver of time, which I thought then was acceptable (hell it wasn’t and I have a different story to tell proving to myself it doesn’t, ffs). His story was more intense, complicated, and at times, toxic. But even then I saw how he’s not giving up chasing and wanting her but not in a creepy, forcible way – I had urges to tell him he’s a different kind of lovestruck stupid because there wasn’t any force on his end to begin with. He was always on the waiting end, he was always the understanding one, always putting rational explanations as to why they are good for each in many sense of the word (some examples of which are TMI but trust me on this) but why can’t they be together? When we started talking it had been Groundhog Day for them, and yet he’s still there. And it’s not as if he was given a no. He wasn’t. He still chased because he was given hope, and I read lengthy emails and messages to prove this. I know the setup can be off-putting but you know what, sometimes, talking to a stranger could help you more. It’s always a risk but blame my naivete, I also believe in people coming into your life for a reason.

I was flattered by the level of confidence he had in me. It could be because he saw through me – that I certainly don’t judge at all and that I know how it felt to wait, to painfully crawl your way in just for that little space of affection. Without saying anything more, his was the story to root for in terms of wanting to see a good future.

There was a very big development on his end by the end of the year. His assignment went on schedule and his personal life was like pieces putting themselves together. He finally got his wish: to have the woman agree to be with him. Moreover, she moved out of state and stayed with him on the island. I am so happy for him.

At one point he told me the woman knew about me. He wanted to come clean to her so my name came up as one of those he talked to while they’re not officially back together. Photos were sent and I was informally introduced to her. I assured her that her guy has been a supportive friend and I’m very happy for them. She’s okay. I even got an invite to travel back to the island and stay with them. We’re good.

Then just last week, he sent me this. 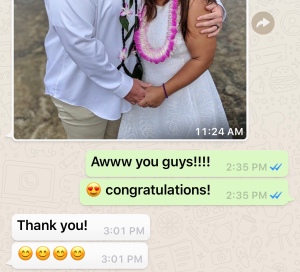 What a lovely couple they make! I keep thinking how much it took for both of them to get there. I was privy to the struggle almost at the end of the saga, and I am happy I can share this resolution.

Ever since I started talking to him I realized the universe was showing me what I deserve. He was not another “wrong” person or a rebound guy to mess with. Through him I saw that there are men who can and who will; that they exist, darnit. It took me months to finally figure it out. And once I did, I knew how to make sense of things.

We met while we were both hurting. A year later, we are both happy, although unlike him, I did not end up with whom I (thought I) wanted to be with – I forgot about about him instead.